Once again being inspired by kristieMN's free crochet patterns on Crochetville, I couldn't resist making a knitted version of her Happy Hippo. She was super quick to make and required a very small amount of yarn. I knit her on 3.25mm needles which made a finished toy measuring 3.5" long and 2" tall, but you can knit her on larger/smaller needles to adjust the size of the finished toy.
Even though this is knit on straight needles it can be easily asapted to dpn's to save on the seaming.
ok here is the pattern:


Cut yarn leaving a long tail,draw tail through remaining stitches. At this point to may want to add the safety eyes (or embroider some eyes on with thread or yarn for babies or very small children) and use scraps black yarn to embroider on some nostrils. Use the long yarn tail to mattress stitch the row ends together, stopping halfway to stuff and then along to the cast on stitches. Pull the yran tail through the cast on stitches to give a drawsting effect, tie off and weave in any loose ends.


Cut yarn leaving a long tail,draw tail through remaining stitches. Use the remaining yarn tail to attach the ears to the head.


Cut yarn, leaving a long tail. Draw tail through remaining stitches and pull tightly and secure.Use tail to mattress stitch row ends closed (please note i didnt fill the legs with stuffing but you can if you wanted to, just remember to stop halfway to stuff). Continue until you reach the cast on stitches, leave a long yarn tail to sew the legs to the body.

Finishing
Attach the head to the BO stiches of the body (I attached the head roughly halfway down)
Attaches the legs to the body and the ears to the head.
To make a tail,cut a small piece if yarn and tie a knot at the end. Using the opposite end from the knot, attach the thread to the hippo's bottom.


All Done! Now you have your very own little hippo.
Feel free to share pictures of your finished toy on the knitted toy box flickr group.
♥ Raynor

These are very cute. I can't wait to try them out.

Adorable. Thanks so much for sharing.

That is so cute! I will save this in my bookmark and I will knit this one day!!!! Thanks for posting!

Hi, lovely, I love the hippo,knitted toys are so fun to do.

OMG. Thank you so much. MY friend kayla said she wanted a hippo for christmas now I can give her a hippo. Thanks so much.

Thanks for the cute pattern. My friend who is in to feng shui said I need a blue hippo in my corner this year.

My friend knitted it and it was adorable! im still a begginer but hers turned out amazing! 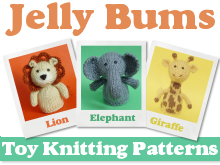 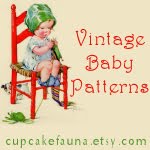 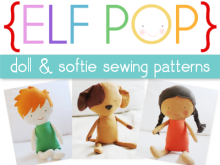